The Clapp Memorial Library is a welcoming and lively center for lifelong learning, personal enrichment and community interaction.

It is dedicated to serving greater Belchertown as a vital cultural resource and community center, and recognizes its role to promote the value of reading and self expression to local youth.

The Library meets community needs as they evolve over time and connects its users to ideas, technologies, experiences, and to others in the community and the world at large. 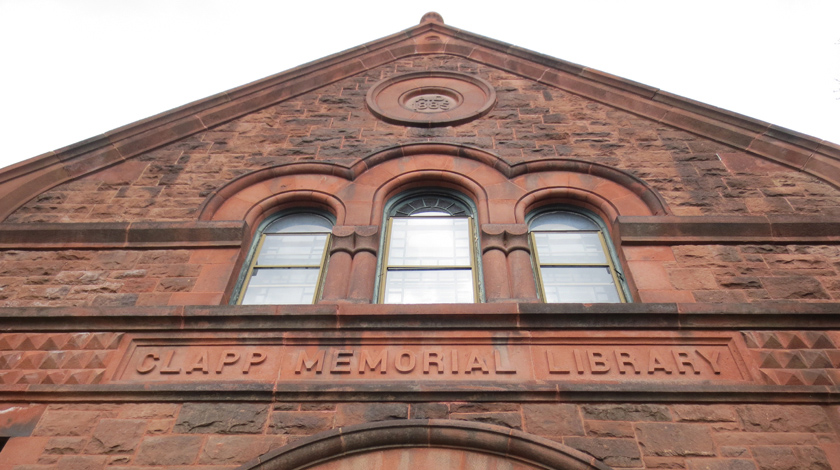 A Brief History of the Library

The Clapp Memorial Library was built as the result of a bequest from Belchertown native John Francis Clapp. Clapp’s father, James Harvey Clapp, moved to Belchertown from Northampton in 1812, and was prominent in public affairs for over sixty years, serving as a selectman, County Commissioner, and three-term representative to the State Legislature.

John Francis, the eldest of 8 children, was born in 1818.  He left a bequest of $40,000 in the hands of his brothers, with the provision that it be used for the construction of a library and for the purchase of its contents. Clapp, who died in 1882, had stipulated that work on the project be completed within five years. On June 30, 1887, the Clapp Memorial Library building was dedicated.

The Library building was designed by New York architect H.F. Kilburn in the Romanesque revival style that had been made popular in the 1870s by Henry Hobson Richardson. Built in the form of a Latin cross, the structure features an 80-foot-high tower that rises from the intersection of the transepts and nave.

The interior of the building is dominated by two stained glass windows, thought to have been fabricated by H.E. Hartwell, a New York decorator and designer who was also responsible for the interior decoration of the Library.

The builders, Bartlett Brothers of Whately, MA, used local materials as much as possible in the construction of the Library. All the stonework originated in Massachusetts. The roughly cut exterior walls are Longmeadow brownstone, while the brick trim was carted from Holyoke. Even the stained glass windows were crafted from sand and silica mined in western Massachusetts. The interior woodwork is of ash, stained an antique oak shade and highly polished.

Lydia A. Barton, the first librarian, opened the Library doors on September 1, 1887 and served until her death in 1911. The Library building is not owned or maintained by the Town, but is owned by the Trustees of the Library.  Read a full history of the Library here.